In the late 1960’s, Robert Pearston was asked by the then District Commissioner (DC) John Lyson, to form a Scout Group in Dalgety Bay. Robert had been involved in Scouting in his hometown of Rutherglen where he was a member of the 38th Glasgow Group. He took up the challenge and the Scout Group was founded. Our neckie was chosen to be navy with a white border, chosen by Robert for sentimental reasons, as the neckie of the 38th Glasgow was white and blue.

The growth of the town of Dalgety Bay was such that there were enough children to form a Cub Pack. There were 20 prospective cubs at that first meeting and the Pack was named St Bridgets. A Scout Troop, also known as St. Bridgets, was formed a year later, for those cubs reaching the age for Scouts. With two successful sections the 48th Fife (Dalgety Bay) Scout Group was officially formed in 1969. The first Group Scout Leader (GSL) appointed was Ian Turnbull and both sections met in the old Dalgety Parish Church hall.

The Group carried on throughout the 1970’s with the two sections, and William Anthony took over as GSL. In 1978 Jerry Pyke arrived in the Bay and took over as GSL. Jerry has a vision that the Group would have our own hall and more sections to cater for all the new houses being built in the Bay. Jerry noticed that some of the older scouts were reaching the age to go onto the next section so he very quickly formed a Venture Scout Unit that used to meet in his house and the houses of the Venture Scout Leaders. Jerry’s wife Maureen, had joined the Cub Section and persuaded the Group’s Executive Committee to start fundraising and to try and find a piece of land where we could build a hall. In the meantime, the Community Centre was hired on a Thursday to start another Cub Pack, Donibristle, as St. Bridget’s was bursting at the seams. This second pack proved very popular and was soon running at capacity.

In 1980 Gordon and Elaine Pert arrived in Dalgety Bay, also having come from 38th Glasgow and within a week of contacting Jerry, plans were put in place to start a second Troop. Donibristle School was the meeting place for the new troop. More equipment had to be found and as we had no storage facilities all the equipment was kept at Jerry’s house. By 1981 we had so many brothers of Cubs wanting to join the Group a Beaver colony was formed. Beavers had been part of the Scout Movement unofficially since 1976 and as Elaine had ran a Colony in the 38th, Jerry saw the opportunity to saw start a colony in the Bay. They met before the Cubs in the Community Centre. Donibristle Beavers were the first Colony not only in the District but also in Fife Area.

Fundraising for a hall continued, although no available ground for a hall could be found. Then, in 1982 the new Dalgety Parish church opened in the centre of the town, giving the Group the opportunity to purchase the old Church Hall where two of the sections already met. The Church of Scotland sold us the hall for £4,500, leaving us enough money to update it for our purposes. On 17th September the hall was handed over to the 48th. At last, somewhere to store our equipment. With our own hall, Jerry lost no time in starting a second Beaver colony, St.Bridgets. After a few months the Cub packs were full and with two Beaver colonies feeding them, it was decided to open a third pack, St. David’s. This in turn caused problems for the troops, so Gordon as Scout Leader (SL) of Donibristle Troop, left it in the other leaders capable hands and started a third troop, St. David’s. 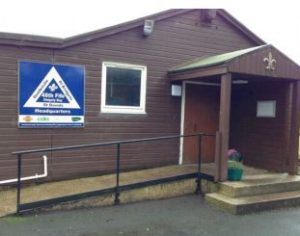 Beavers were becoming so popular and with so many names on the waiting list, a third Beaver colony, St David’s was opened. The headcount at that time in the Group was 220 youth members and 35 Leaders. Jerry remained as GSL until 1985 when his work took him south. George Heckles who had been an assistant scout leader in St Bridget’s Troop took over as GSL. As George worked offshore, he appointed an assistant GSL to run things when he wasn’t available. George was tragically killed in a helicopter crash in the North Sea in 1990.

Gordon Pert as assistant GSL took over as GSL and held this role until 1994 when he became the District Commissioner. During Gordon’s time the Group celebrated their 25th anniversary. Elaine took over as GSL from Gordon, and has seen many changes in the last 15 years. New training programme: Girls in scouting: New badges: New Explorer Scouts section: Sections having to close (St. Bridget’s Troop and St. David’s Colony) due to lack of Leaders. We have a recruitment programme pending hopefully to enable us to re-open the sections we had to close, as all the sections are full, and there is waiting list of boys and girls wanting to join.

We have a lot to thank our founder, Robert Pearson for. Sadly, Bob passed away in October 2012, but his daughter Pat is the minute secretary, and his grandson Calum was one our Explorer Scouts.